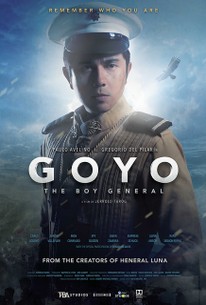 GOYO: The Boy General is a historical biopic that focuses on the last months in the life of Gregorio del Pilar (Paulo Avelino), one of the youngest generals of the Philippine Revolution (against Spain) and the Philippine-American War. He was the most trusted ally of Emilio Aguinaldo, the Philippine President and Commander-in-Chief during the Revolution and War. GOYO is the next installment, following the surprise 2015 blockbuster hit HENERAL LUNA, a film that chronicled Revolutionary General Antonio Luna's life (and which also had a US theatrical release in October 2015). After five months of relative peace, the U.S. Army begins its final push to crush the Philippine army and capture Aguinaldo. Goyo faces the biggest challenge of his life as he oversees the large caravan of officers, soldiers and civilians making their perilous escape through the mountains of the Northern regions. The hovering presence of death and failure throughout the journey ultimately calls into question Goyo's accomplishments and public popularity. The boy general is forced to grow up and ask the only question that matters during times of war: What does it really mean to be a hero?

There are no featured audience reviews for Goyo: The Boy General at this time.