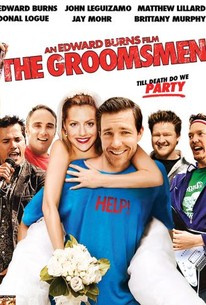 Director and star Burns returns to his home turf -- dialogue-driven examinations of the relationships between men and women -- with uneven results.

Five longtime friends enjoy a few days of celebratory carousing as they try to forget their adult responsibilities in this slice-of-life comedy drama from director/writer/actor Edward Burns. Paulie (Burns) is a working-class guy from Long Island who has learned that his longtime girlfriend (Brittany Murphy) is pregnant, and he decides he should do the right thing and marry her. Paulie has asked several of his best friends to stand with him at the wedding, and shortly before the big day, they get together at a local watering hole to give Paulie a proper send-off. Over the course of a weekend, the guys knock back a lot of beer, play a little softball, swat some golf balls, head out fishing and share their thoughts, with each man having some unresolved baggage to deal with. While Paulie is excited about his upcoming marriage, he's scared of how parenthood will change his life. His older brother, Jimbo (Donal Logue), has been arguing with his wife and spending his time in topless bars, but inside he's worried about the fact his wife hasn't been able to get pregnant, and he's convinced it's his fault. Des (Matthew Lillard) is a seemingly happy husband and father, but he seems to be more interested in getting his old rock band back together than spending time with his family. Mike (Jay Mohr) wants to settle down and have kids, but he can't imagine doing so with any woman other than the girl who dumped him some time ago. And while T.C. (John Leguizamo) goes out of his way to like one of the guys, he doesn't have the nerve to tell his best friends that he's gay. The Groomsmen received its world premiere at the 2006 Tribeca Film Festival. ~ Mark Deming, Rovi

Heather Burns
as Julianna
View All

News & Interviews for The Groomsmen

Critic Reviews for The Groomsmen

Audience Reviews for The Groomsmen