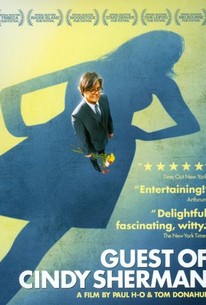 The filmmakers' motivations may be suspect, but this inside look at New York art legend Cindy Sherman -- and, by extension, the culture she inhabits -- is undeniably satisfying.

Analyzing his relationship with the reclusive artist Cindy Sherman leads filmmaker Paul H-O (Hasegawa-Overacker) to confront his own identity in this personal and unexpectedly humorous documentary. Paul H-O became a fixture of the New York art scene in the 1990s with his public access show "GalleryBeat." Armed with a video camera, he attended art gallery openings, intriguing many with his candid, witty assessments of the work and winning fans in the process. Among the latter was Cindy Sherman, the press-shy art superstar, who invited Paul to her studio for a series of exclusive filmed interviews. In these sessions, he gains insight into her artistic process and a romantic relationship blossoms as they fall in love. Their initial bliss takes a turn when Paul gets caught up in the aura of Cindy's celebrity and he is subordinated to a role as Cindy's guest at the star-studded openings and dinners she regularly attends. Spanning over 15 years and with unprecedented access to the great artist, including interviews with a veritable who's who of the art and entertainment world, the film paints a vivid picture of the contemporary art scene and provides a witty, illuminating look at celebrity, anxiety, and art.