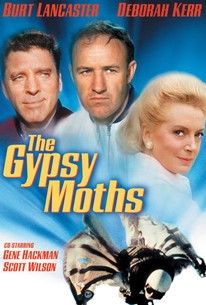 John Frankenheimer directed this low-key drama about three men who stage a sky-diving thrill show and what happens when they roll into a small town in Kansas. Mike Rettig (Burt Lancaster) is the oldest of the group and more than a bit jaded; Joe Browdy (Gene Hackman) is the fast-talking MC who knows how to work the crowd; and Malcolm Webson (Scott Wilson) is the rookie of the group. When they get a job performing in Bridgeport, Kansas, Malcolm arranges for them to stay at the home of his Uncle John (William Windom) and Aunt Elizabeth (Deborah Kerr). John and Elizabeth's marriage has seen better days; they've grown apart from each other, and when Elizabeth meets Mike, a spark of passion catches fire between them which neither can fully control. The two fall into an affair, making love one night in the living room, not caring that John is watching them. However, this relationship does not bring Mike out of his depression and leads to a shocking incident at the group's next show. The Gypsy Moths marked the first time Burt Lancaster and Deborah Kerr had worked together since their memorable pairing in From Here to Eternity (1953).

Critic Reviews for The Gypsy Moths

Audience Reviews for The Gypsy Moths