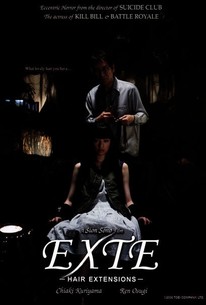 Chiaki Kuriyama (Kill Bill, Vol. 1) and prolific character actor Ren Osugi (Nightmare Detective) star in Suicide Club director Sion Sono's alternately satirical and terrifying tale of hirsute horror. Yuko (Kuriyama) is a eager apprentice at the Gilles de Rais salon who dreams of one day becoming a famous hair stylist. As a child Yuko was tormented by her sadistic older sister Kiyomi (Tsugumi), though these days the abusive sibling is more inclined to satisfy her mean streak by abusing her own subservient daughter Maki (Miku Sato). Meanwhile, on a nearby freight car, the corpse of a young woman who appears to have become an unwilling organ donor is discovered in a massive nest of hair. When the corpse arrives at the local morgue, misanthropic hair fetishist Yamazaki (Osugi) abducts the cadaver after noticing that it produces an endless wave of hair from every orifice and incision. But these aren't your typical passive locks; strangely they seem to exhibit a life of their own. In order to turn a tidy profit, Yamazaki soon begins selling the strands to local salons so that they may be made into hair extensions. Later, when the murderous manes begin turning on the heads that hold them, the battle between two sisters for the custody of the frightened Maki is soon interrupted by a most unusual development. ~ Jason Buchanan, Rovi