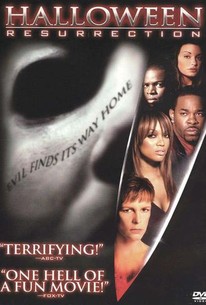 The only thing this tired slasher flick may resurrect is nostalgia for when the genre was still fresh and scary.

Director Rick Rosenthal, who helmed the very first sequel to Halloween (1978), returns to the horror film series with this eighth entry in the long-running franchise. This time the story line returns to the Haddonfield, IL, family home of serial killer Michael Myers (Brad Loree), now the site of a contest where six college students are dared to spend the night, as their experience is broadcast live on the Internet. Their personalities and motivations are varying: Sara (Bianca Kajlich) is a shy psychology major; Jen (Katee Sackhoff) hopes to launch a broadcasting career; Rudy (Sean Patrick Thomas) is a culinary arts student; Bill (Thomas Ian Nicholas) is a womanizing law student; Jim (Luke Kirby) is a rebellious musician; and Donna (Daisy McCrackin) is a brainy skeptic. Believing that the night is nothing more than a stunt that will provide them with scholarship money, the ill-advised participants are soon shuffling off their mortal coils thanks to Michael's typically ghoulish but creative methods of homicide. In the meantime, Michael's sister, Laurie Strode (Jamie Lee Curtis), is a suicidal mute, incarcerated and hospitalized for the murder of an innocent man she wrongly believed was her brother three years earlier, but a confrontation between the combative siblings is brewing. Halloween: Resurrection (2002) co-stars rapper Busta Rhymes and supermodel Tyra Banks.

Charisse Baker
as Teen Girl No. 2

Anada Thorson
as Coroner
View All