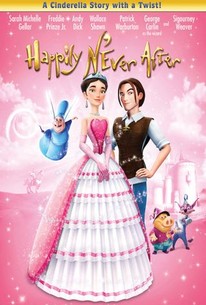 Happily N'Ever After has none of the moxy, edge, or postmodern wit of the other fairy-tales-gone-haywire CG movie it so blatantly rips off.

Cinderella's wicked stepmother has tipped the balance of power toward the dark side in Fairy Tale Land, and now it's up to the put-upon princess to restore order and ensure that good triumphs in an animated adventure featuring the voices of Sarah Michelle Gellar, Freddie Prinze Jr., Sigourney Weaver, and George Carlin. For years, the Wise Wizard has worked hard to ensure that the scales of good and evil were always well-balanced, but as with any hard worker the Wise Wizard needs a relaxing vacation every once in a while. When the Wise Wizard goes on holiday, his faithful assistants Munk and Mambo make the crucial mistake of allowing Cinderella's wicked stepmother, Frieda, come into possession of their master's magical staff. With time fast running out before Frieda casts a shadow of darkness and sorrow over Fairy Tale Land, Cinderella must now awaken from her romantic dreams to take on her fearsome stepmother with a little help from her best friend, Rick, and a virtual army of heroic dwarves and fairies. ~ Jason Buchanan, Rovi

George Carlin
as The Wizard

John DiMaggio
as Dwarves No.1 and 2, Giant

Tress MacNeille
as Witch No.1

Phil Proctor
as Amigo No.1

Robert F. Paulsen
as Amigo No.2

News & Interviews for Happily N'ever After

Critic Reviews for Happily N'ever After

Audience Reviews for Happily N'ever After