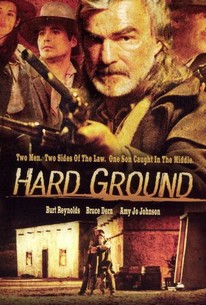 Unjustly arrested and sentenced to a 99-year-term, grizzled half-breed bounty hunter John McKay (Burt Reynolds) is serving hard time in Yuma Territorial Prison when he is swept up in a prison break engineered by sadistic vigilante leader Billy Bucklin (David Figlioli). Once on the outside, Bucklin and his brigands cut a swath of terror and murder throughout the Arizona Territory, then head to Mexico, there to link up with a despotic revolutionary leader. Given an opportunity to redeem himself by helping track down and capture Bucklin, McKay reluctant teams with ageing Sheriff Nate Hutchinson (Bruce Dern) -- the very man who sent McKay up in the first place. Among McKay and Hutchinson's tiny posses are feisty Liz Kennedy (Amy Jo Johnson), who after her family is murdered by Bucklin has a personal score to settle (if she can ever get accustomed to riding a horse or wielding a rifle, that is), and Hutchinson's deputy Joshua (Seth Peterson), McKay's own son. The made-for-cable Western Hard Ground premiered July 12, 2003, on the Hallmark Channel.

There are no critic reviews yet for Hard Ground. Keep checking Rotten Tomatoes for updates!

There are no featured audience reviews for Hard Ground at this time.