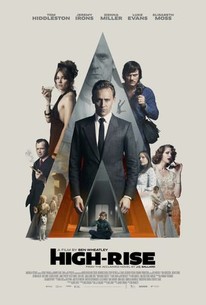 High-Rise may not quite live up to its classic source material, but it still offers an energetic, well-acted, and thought-provoking take on its timely socioeconomic themes.

HIGH-RISE stars Hiddleston as Dr. Robert Laing, the newest resident of a luxurious apartment in a high-tech concrete skyscraper whose lofty location places him amongst the upper class. Laing quickly settles into high society life and meets the building's eccentric tenants: Charlotte (Miller), his upstairs neighbor and bohemian single mother; Wilder (Evans), a charismatic documentarian who lives with his pregnant wife Helen (Moss); and Mr. Royal (Irons), the enigmatic architect who designed the building. Life seems like paradise to the solitude-seeking Laing. But as power outages become more frequent and building flaws emerge, particularly on the lower floors, the regimented social strata begins to crumble and the building becomes a battlefield in a literal class war.

Tony Way
as Robert the Caretaker

New on Netflix in September 2019: New Movies, TV Shows, Netflix Original Series
London Critics: La La Land Is Named Film of the Year
On DVD This Week: Keanu, The Lobster, The Knick, and More
View All