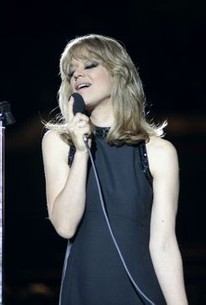 This lavish, broadly scaled feature from director Kai Wessel dramatizes the life of Hildegarde Knef (1925-2002), arguably the most popular actress and chanteuse in post-WWII Germany. Yet in lieu of presenting a chronological and all-inclusive account of Knef's decades-long career, Wessel and screenwriter Maria von Heland use Knef's 1966 concert at the Berlin Philharmonie as a narrative framing device from which they exclusively flash back to the years depicting the performer's early ascent to stardom; the film thus ends as Knef is just beginning to achieve acclaim and recognition as a vocalist. The backstory commences in 1943, when 17-year-old Knef (Heike Makatsch) aspires to show business life. She applies for a job at Babelsberg Studios, under the aegis of casting director Else Bongers (Monica Bleibtreu) who becomes her lifelong mentor. Knef finds it relatively easy to break in to the industry; unfortunately, her political leanings reflect great naïveté, and these are the years of The Third Reich, when Propaganda Minister Josef Goebbels supervises all German art and culture -- and the actress falls into Nazism without hesitation. Hilde soon grows smitten with Third Reich film head Ewald von Demandowsky (Anian Zollner), then -- after the war ends with the loss of the Nazi party -- catches the eye of genial producer Erich Pommer (Hanns Zischler), a man appointed to rebuild the German movie industry. Shirking past Nazi ties, Knef ventures to America at the invitation of mogul David O. Selznick, and spends the next several years repeatedly shuffling back and forth between the U.S. and Deutschland as opportunities surface in both countries. Following a scandal involving a nude swimming scene in the movie The Sinner and a marriage to actor David Cameron (Dan Stevens), Hilde fixes her sights on a singing career and finally achieves the breakthrough of which she has long dreamed.

Monica Bleibtreu
as Else Bongers

There are no critic reviews yet for Hilde. Keep checking Rotten Tomatoes for updates!

There are no featured audience reviews for Hilde at this time.