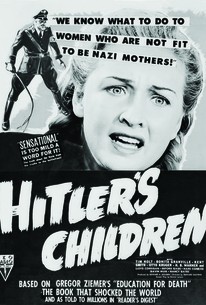 This modestly produced film version of Gregor Ziemmer's book Education for Death surprised everyone at RKO--and in the film industry--by becoming one the biggest hits of 1943. The "children" invoked in the title are borne on behalf of Adolf Hitler; according to the film, it is standard operating procedure in Nazi Germany for young girls to willingly submit to being impregnated by Aryan men (with or without the benefit of clergy) in order to sustain the "Master Race." Those who refuse are ticketed for sterilization, or worse. One of the holdouts is Bonita Granville, a German girl raised and educated in America whose taste of democracy has made her utterly resistant to Nazism. In the film's key scene, the near-naked Bonita is publicly flogged for her defiance, whereupon Bonita's lover, "good Nazi" Tim Holt, suddenly has an awakening of conscience and stops the whipping. This act of courage results in the executions of both Holt and Granville, but they willingly go to their deaths rather than accede to Hitler's demands. It is true enough that many people flocked to see Hitler's Children because of the sensational, censor-provoking aspects of the film, but equal numbers of filmgoers and critics also recognized the above-average artistic contributions of director Edward Dmytryk and scriptwriter Emmet Lavery (both of whom received substantial cash bonuses for their work on this film). Hitler's Children was the second biggest moneymaker of RKO's 1943-44 season, only slightly behind the Cary Grant vehicle Mr. Lucky.

H.B. Warner
as The bishop

There are no featured audience reviews for Hitler's Children at this time.