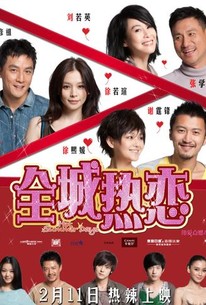 This Cantonese-language ensemble drama from directors Tony Chan and Shya Wing transpires during the hottest summer in Hong Kong history, where numerous stories magically intersect. While a young female factory worker asks her romantic suitor to stand outside in the blazing heat for 100 days in a row to prove his love for her, a blind photographer obsessively combs the city searching for the gorgeous model he accidentally insulted. Meanwhile, in other corners of the city, a foot masseuse and a chauffeur forge a romantic connection through text messaging; a sushi chef makes a bold culinary attempt to win the heart of a food critic with whom he is smitten; and an old man combs the city for an antique lightbulb that he will use to honor his late wife. And still another story is woven into this mix, with an air conditioner repairman repeatedly challenging a mystery woman to a road race. As the summer rolls forward, the destinies of these individuals will impact one another in unforeseen and consistently surprising ways. ~ Nathan Southern, Rovi

Cara G.
as Girl in Lamborghini

There are no featured audience reviews for Hot Summer Days at this time.