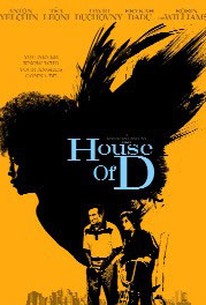 A sincere but inept coming of age story.

Actor David Duchovny made his debut as a director and screenwriter with this coming-of-age drama, in which a grown man looks back at his adolescence. It's 1973, and Tommy (Anton Yelchin) is a 13-year-old boy living in New York's Greenwich Village with his mother (Téa Leoni), who is still coming to terms with the death of her husband. Tommy's best friend is Pappass (Robin Williams), a mentally challenged man who is in his thirties, but is at the same emotional age as Tommy; Pappass delivers meat for a local butcher, and Tommy helps him out. Tommy has discovered women, and has a crush on Melissa (Zelda Williams), a cute girl in his class, but Pappass isn't much interested in the opposite sex, and can offer little advice on the subject. Tommy's lone confidante on this issue is Lady Bernadette (Erykah Badu), a woman locked up in the nearby Women's House of Detention who offers advice shouted from her window. When Pappass begins to realize that Tommy is falling for Melissa, he's convinced he's losing his best friend, and in a moment of anger he steals a bicycle. Tommy tries to protect Pappas by claiming he was the thief, leading to a series of serious repercussions. Years later, Tommy (now played by Duchovny) is a grown man who leaves his home in Paris, France, to pay a visit to the old neighborhood and come to terms with the life he left behind.

James Ockimey
as Another Kid

Mary A. Fortune
as Nurse 1

News & Interviews for House of D

Trailer Bulletin: Fast and the Furious: Tokyo Drift
Duchovny Tells a "Secret"
There’s a Whole Lot of Robin Williams on the Horizon
View All

Critic Reviews for House of D

Audience Reviews for House of D