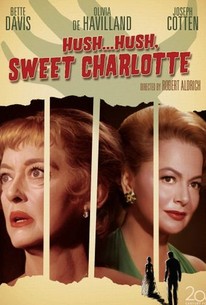 An unusually long pre-credits sequence establishes the roots of faded Southern belle Charlotte's (Bette Davis) insanity; she'd been witness to the dismemberment murder of her fiance (Bruce Dern) and the suicide of the murderer, her own father (Victor Buono). Years later, Charlotte remains a recluse in her decaying southern mansion, zealously guarding the secret of her father's guilt; she is cared for by her slatternly housekeeper (Agnes Moorehead). When her house is targeted for demolition, Charlotte fears that this will uncover her lover's body parts and thus confirm that her father was a murderer. She desperately summons her seemingly sweet-tempered cousin Miriam (Olivia De Havilland) to help her fight off the house's destruction. Miriam brings along the family doctor (Joseph Cotten) to calm Charlotte's frayed nerves. When Charlotte begins to be plagued by horrific visions of the homicide/suicide of so long ago, it appears that she has gone completely insane. But soon we learn who is behind these delusions...and why. Hush Hush Sweet Charlotte was intended by director Robert Aldrich as a follow-up to the successful Joan Crawford/Bette Davis horror piece Whatever Happened to Baby Jane (1962). Ms. Crawford was originally slated to play Miriam, but became seriously ill shortly before filming started. Davis, who disliked Crawford intensely, suggested that the role of Miriam be filled by her best friend, De Havilland. On the first day of shooting, Davis and DeHavilland pulled a "Ding Dong the Witch is Dead" routine by toasting one another with Coca-Cola--a catty observation of the fact that Joan Crawford's husband was an executive with the Pepsi Cola company! ~ Hal Erickson, Rovi