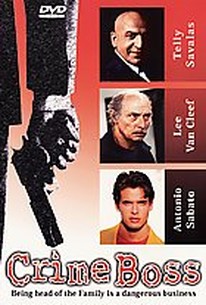 A cocky young hoodlum may have gotten in over his head as he reaches for the top in this crime drama. Antonio Mancuso (Antonio Sabato) comes from a small town in Sicily where there are few opportunities for a young man to build a career. Eager to make something of himself, Antonio travels to Italy on the recommendation of a local mobster, and becomes a low-level Mafioso working with his cousin Nicola (Giuliano Persico), an underworld jack-of-all-trades who moonlights as a pimp. It doesn't take long for Antonio to prove himself as a hired gun, and he's introduced to Don Vincenzo (Telly Savalas), the ruler of the Italian syndicate. While Don Vincenzo is aware of Antonio's ruthless ambition, he also admires the young man's courage and confidence, and takes Antonio on as his protégé. But when Antonio sets out to take over Don Vincenzo's place in the mob hierarchy, he turns his greatest ally into an enemy, and the fact he's having an affair with the Don's beautiful daughter Monica (Paola Tedesco) doesn't help matters. Originally released in Italy as I familiari delle vittime non saranno avvertiti (literally Families Of The Victims Will Not Be Warned), Crime Boss was also released as New Mafia Boss and The Mafia Terminator. ~ Mark Deming, Rovi

There are no critic reviews yet for Crime Boss. Keep checking Rotten Tomatoes for updates!

There are no featured audience reviews for Crime Boss at this time.