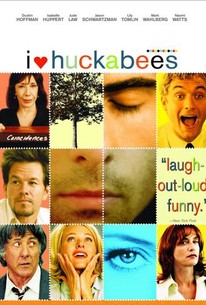 I Heart Huckabees certainly isn't for everyone, but audiences attuned to its quirky wavelength will find a singularly brainy screwball comedy that refuses to pander.

Convinced that a series of coincidences involving a doorman hold some secret to life's largest riddles, Albert Markovski seeks the help of a detective agency unlike any other--which leads him down a path that questions the essence of existence itself. In an attempt to ferret out the meaning of these flukes, he consults Bernard and Vivian Jaffe, AKA the Existential Detectives, a pair of married metaphysicians who fearlessly investigate the mysteries at the core of their clients' secret innermost lives. Bernard and Vivian kick off their existential exploration of Albert Markovski by probing his past and present reality. Along the way, they uncover his festering conflict with Brad Stand, a golden boy executive climbing the corporate ladder at Huckabees, a popular chain of retail super-stores that wants to sponsor Albert's Open Spaces Coalition for the PR value. The Existential Detectives are convinced that Brad (seemingly Albert's opposite) is the key to cracking Albert's case, but then Brad turns the tables on their investigation, by hiring the detectives himself. As Bernard and Vivian begin to dig deeper into Brad's ambition and his relationship with Huckabees' hot blonde spokes model Dawn, Albert begins to lose faith and rebels against their conclusions. Pairing up with another of the duo's clients--firefighter, tough guy and uncompromising soul searcher Tommy--he joins forces with the Jaffes' arch nemesis, the sexy French philosopher Caterine Vauban, who valiantly battles for the contrasting point of view. Now, as Being chases Nothingness, Albert, Tommy, Brad, Dawn, Bernard, Vivian and Caterine chase one another in a wild romp through life's biggest questions to find the true answer.

Ashley A. Fondrevay
as Frosh Girl

Shania Twain
as Herself

Kimberly Cutter
as Corporate Board

John Rothman
as Corporate Board

Jeannie Epper-Kimack
as Lady in Gown

Jake Hoffman
as Valet
View All

News & Interviews for I Heart Huckabees

Critic Reviews for I Heart Huckabees

Audience Reviews for I Heart Huckabees