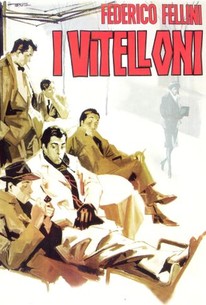 Italian maestro Federico Fellini's first international success is a nakedly autobiographical film that bears many of the formal and thematic concerns that recur throughout his work. Set in the director's hometown of Rimini, I Vitelloni follows the lives of five young vitelloni, or layabouts, who while away their listless days in their small seaside village. Fausto (Franco Fabrizi), the leader of the pack, marries his sweetheart, but finds himself constantly distracted by other women. Meanwhile, would-be playwright Leopoldo (Leopoldo Trieste) continues work on his dreary plays, dreaming of staging them one day. Clownish Alberto (Alberto Sordi) still lives at home with his mother and sister, Olga (Claude Farell), while boasting of preserving the family honor by watching over her. While the movie seems to pay little attention to Riccardo (Riccardo Fellini) and Moraldo (Franco Interlenghi), the latter eventually emerges as its key character, plainly serving as Fellini's alter ego. Stuck in adolescence, the five friends stumble into various misadventures, as they seek to spice up their uneventful provincial lives. Ultimately, one of them breaks free from their self-imposed paralysis and moves on, leading to one of the most poignant farewell sequences in film history. A hit in Italy upon its release, I Vitelloni secured Fellini's reputation as an up-and-coming talent, while also introducing its title into Italian vernacular.

Arlette Sauvage
as Woman in the Cinema

Jean Brochard
as Father of Fausto

Claude Farere
as Sister of Alberto

Achille Majerone
as Head of a Theatre Troup

News & Interviews for I Vitelloni

Critic Reviews for I Vitelloni

Audience Reviews for I Vitelloni