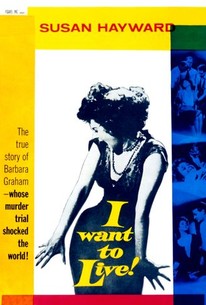 I Want to Live!

I Want to Live! Photos

Grim, almost unbearably intense, I Want To Live is the story of the life and execution of Barbara Graham (Susan Hayward) a perjurer, prostitute, liar and drug addict. The product of a broken home, Graham works as a shill, luring gullible men into crooked card games. She attempts to go straight, marries the wrong man, and has a baby. When her life falls apart, she returns to her former profession and is involved in a murder. Despite her claims of innocence, she is convicted and executed. Robert Wise directs the uniformly fine cast with grim efficiency, telling Graham's story in a series of adroitly crafted scenes that won him a well-deserved Academy Award nomination. However, the film belongs to Susan Hayward who gives a intense, shattering performance without one false note. Her performance is so grimly focused that she is, at times, almost unbearable to watch. The final scenes, which lead up to Graham's execution, are exhausting in their emotional intensity as the audience is spared nothing of Graham's agony, despair and desperation when she finally loses the long battle to save her life. Whether one sees Graham as a murderer or a hapless victim of society, the power and relentless, sordid reality of her story leaves an indelible memory in the mind of the viewer.

George Putnam
as Himself

Shelly Manne
as Musician
View All

News & Interviews for I Want to Live!

The Weekly Ketchup: A "Simpsons Movie" Trailer, "Pirates 3" and "Dark Knight" Tidbits, And More!
Hollywood Giant Robert Wise Passes Away at 91
View All

Critic Reviews for I Want to Live!

Audience Reviews for I Want to Live!

I Want to Live! Quotes