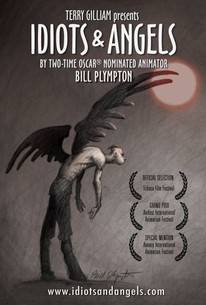 Animator Bill Plympton offers a moral fable with his own surreal touch in this dark comedy. Tough guy Angel wakes up one morning to discover his body has begun to match his name -- a pair of wings has sprouted from his back. Angel doesn't care to have wings and is annoyed by the ridicule they inspire among his drinking buddies, so he cuts them off, only to find they quickly grow back. Even worse, Angel learns the wings have their own moral compass, and while he's a bitter and self-centered man, the wings are forcing him to be benevolent in a way that hardly suits him. Hoping a professional can help, Angel has a surgeon amputate the wings, but when Bart, the bartender at Angel's favorite watering hole, makes trouble for a woman who is a regular at the tavern, the wings return again and the barkeep realizes he can use Angel's talents to his advantage, leading to a war of wills between two corrupt men and one mysterious force for good. Angels And Idiots tells its story without dialogue but does include songs from such artists as Tom Waits, Moby, Pink Martini and Nicole Renaud.

News & Interviews for Idiots and Angels

Critic Reviews for Idiots and Angels

Audience Reviews for Idiots and Angels