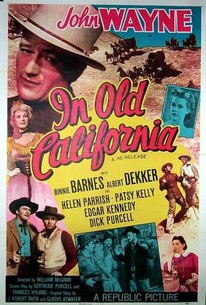 With its slight resemblance to Destry Rides Again (1939) -- probably not entirely coincidental -- this rousing Western from Republic Pictures remains a joy throughout. John Wayne plays Tom Craig, a mild-mannered druggist from Boston who opens a shop in wild and woolly Sacramento shortly before the Gold Rush. The town is "owned" by the Dawson brothers, Britt (Albert Dekker) and Joe (Dick Purcell), who poison Craig's tonic when saloon hostess Lacey Miller (Binnie Barnes) takes too much of an interest in the handsome newcomer. Town drunk Whitey (Emmett Lynn) has one drink too many, and all of Sacramento is soon in a lynching mood. The news of "gold in them thar hills" saves the druggist in the nick of time, but his business is destroyed. While everyone is heading for the gold fields, Craig prepares to leave town with snobbish debutante Ellen Sanford (Helen Parrish), whom he intends to marry. News of typhoid fever among the prospectors changes his mind, however, and the man once referred to as "a human hitchin' post instead of a two-legged man," risks his own life to save the suffering populace. The Dawson brothers, meanwhile, plan to hijack the medical supplies and sell them to the highest bidder, but when Britt Dawson learns that Lacey is helping the sick and may be stricken with the disease herself, he has a change of heart and eventually confesses to spiking Craig's medicine. Cast against type for most of the film, John Wayne fails to make his amiable druggist entirely believable but remains simply John Wayne throughout -- which is as it should be. Binnie Barnes is rowdy and fun whether leading a chorus of "California Joe" by Johnny Marvin and Fred Rose, or jealously interrupting a tête-à-tête between Wayne and 19-year-old Helen Parrish. Usually cast as glacial "other women" in Hollywood films, the British-born Barnes had actually begun her professional career touring Europe and South Africa with bucolic American headliner Tex McLeod, which was as good a preparation as any to play In Old California's saloon belle. Patsy Kelly, who shoots down her laundry with a Winchester, and Edgar Kennedy, as Wayne's tooth-ache plagued sidekick, add to the general fun. ~ Hans J. Wollstein, Rovi

Horace B. Carpenter
as Townsman in Mob

Forrest Taylor
as Man in Saloon with Carlin

Critic Reviews for In Old California

Audience Reviews for In Old California

There are no featured audience reviews for In Old California at this time.