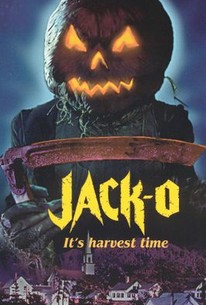 This Florida-lensed slasher silliness (not surprisingly produced by exploitation overlord Fred Olen Ray) is enlivened only slightly by posthumous cameos from John Carradine and Cameron Mitchell, as well as appearances from B-movie "Scream Queens" Linnea Quigley and Brinke Stevens. The plot is basically a riff on the standard Freddy Krueger-esque supernatural-maniac formula, only here the unstoppable psycho is merely a lumbering ghoul with a big pumpkin for a head, awakened from a cursed sleep on Halloween night by the usual handful of obnoxious teenage morons. Amid confusing flashback sequences and some phony occult blathering (courtesy of the town witch), we're told that Jack-O is the incarnation of a murdered farmer who has returned to avenge himself by taking a scythe to his killers' ancestors, but this particular pumpkinhead's people-reaping spree seems to cover a much broader swath, including a crop of nubile young things -- preferably just out of the shower, or fresh from a randy romp in the local cemetery. Even allowing for a certain camp appeal, there's not an original concept to be found amid the abundant nudity and severed limbs.

Heidi Kneisl
as The Hell Pigs

Kerrylynn Dekanski
as The Hell Pigs

Joe Solari
as The Hell Pigs