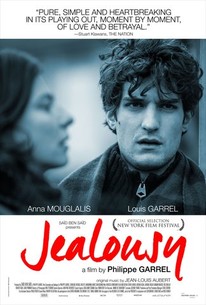 Philippe Garrel is one of the major French filmmakers of the post-New Wave who has slowly begun to gain recognition in America after a career spanning 50 years with the release of his most recent films REGULAR LOVERS, FRONTIER OF DAWN and A BURNING HOT SUMMER as well as the re-release of I CAN STILL HEAR THE GUITAR PLAYING. Shot in lustrous, widescreen black and white by the great Willy Kurant (MASCULIN FEMININ, UNDER THE SUN OF SATAN), JEALOUSY may be Philippe Garrel's most accessible film in nearly 50 years of filmmaking. The film opens with a man leaving his wife and daughter and, in a series of brief conversations, observed gestures, chance encounters and impulsive acts, tells the story of the relationships that flounder and thrive in the wake of this decision. Louis Garrel, the director's son and frequent star, plays the husband who moves into a garret apartment with his fellow actor girlfriend (Anne Mouglalis) as they struggle with fidelity and the temptation to give up their art for an easier life. Shot with Garrel's celebrated sensitivity and attention to faces, bodies, hands and the intricacies of the human heart, JEALOUSY is an especially intimate, deeply poignant and never less than enthralling tale of love, temptation and betrayal. (c) Distrib Films

Mathilde Bisson
as Woman in Cinema

Emanuela Ponzano
as Friend of the Father
View All

Critics Consensus: The Expendables 3 is a Dull Reunion
View All

There are no featured audience reviews for Jealousy at this time.