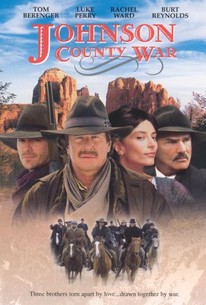 The backdrop for this epic Western, which aired in August 2002 on the Hallmark Channel, will be familiar to fans of the genre and students of Western history. The Johnson County War took place in northern Wyoming in April 1892, growing out of the familiar story of big-money ranchers who suspected homesteader neighbors of rustling. Screenwriters Larry McMurtry and Diana Ossana adapted Frederick Manfred's 1957 novel, Riders of Judgment, which used some of the events and people but changed the names, including the county (which becomes Bighorn) and the main town (from Buffalo to Antelope). Michael Cimino's Heaven's Gate (1981) also employed elements of the Johnson County War in its story. Manfred's book and this film center on Cain Hammett (Tom Berenger), a lonesome cowboy who hankers for Rory (Michelle Forbes); she has married his younger brother Dale (Adam Storke) in spite of the fact that she really loves Cain. A third Hammett brother, Harry (Luke Perry), unlike his honest, homesteading siblings, is a rustler who runs afoul of Marshal Hunt Lawton (Burt Reynolds), who is in the employ of wealthy Lord Peter (Christopher Cazenove), an Englishman in cahoots with the owners of big ranches to exterminate all of the homesteaders, guilty or innocent. Cain Hammett's real-life counterpart, Nate Champion, was a prime target of mercenaries hired by the big cattlemen, and the siege of Cain's cabin, which was the opening salvo in the war, provides the film with its climax.

John F. Parker
as Russell of the Times

J.C. Roberts
as Tom the Granger

Jerry Wills
as Skunker
View All

There are no featured audience reviews for Johnson County War at this time.