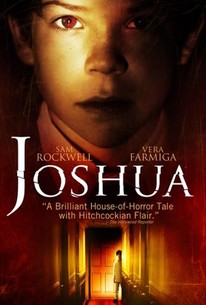 Though Joshua is ultimately too formulaic, its intelligence and suspenseful buildup heighten the overall creep factor.

Sam Rockwell and Vera Farmiga star in director George Ratliff's uncomfortable psychological thriller Joshua, as Brad and Abby Cairn, an affluent young stockbroker and his wife, raising children in New York City. Their firstborn, the nine-year-old Joshua (Jacob Kogan), is a frighteningly intelligent child -- to such a degree that he thinks and acts decades ahead of his age. Nearly always clad in formal wear and demonstrating limitless brilliance as a pianist -- with a marked predilection for "dissonant" classical pieces -- Joshua gravitates toward his gay aesthete uncle (Dallas Roberts) as a close friend, but distances himself from his immediate kin -- particularly when Abby brings a newborn baby sister home from the hospital and unwisely alienates the young tyke. As the days pass, one at a time, the mood at the house regresses from healthy and happy to strange, unsettled, and disorienting; meanwhile, bizarre events transpire. As the baby's whines drive an already strained Abby to the point of a nervous breakdown, Joshua devolves from eccentric to downright sociopathic behavior, discarding all of his toys, disemboweling a stuffed animal, and killing off pets. One at a time, family members also begin to suffer tragic fates -- but are they Joshua's fevered and psychotic doings or merely the result of happenstance? ~ Nathan Southern, Rovi

Box Office Guru Wrapup: "Transformers" Stomps on Foes To Capture #1 Spot With $152.5M Opening
Critical Consensus: "License" is Revoked, "Transformers" About as Much as Meets the Eye
Sundance Awards: "Padre Nuestro," "Grace is Gone" Among Competition Winners
View All