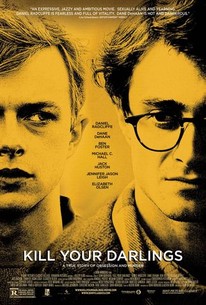 Bolstered by the tremendous chemistry between Daniel Radcliffe and Dane DeHaan, Kill Your Darlings casts a vivid spotlight on an early chapter in the story of the Beat Generation.

Daniel Radcliffe stars as Beat Generation icon Allen Ginsberg in this biopic set during the famed poet's early years at Columbia University, and centering on a murder investigation involving Ginsberg, his handsome classmate Lucien Carr, and fellow Beat author William Burroughs. The year is 1944. Ginsberg (Radcliffe) is a young student at Columbia University when he falls hopelessly under the spell of charismatic classmate Carr (Dane DeHaan). Alongside Carr, Ginsberg manages to strike up friendships with aspiring writers William Burroughs (Ben Foster) and Jack Kerouac (Jack Huston) that would cast conformity to the wind, and serve as the foundation of the Beat movement. Meanwhile, an older outsider named David Krammerer falls deeply and madly in love with the impossibly cool Carr. Later, when Krammerer dies under mysterious circumstances, police arrest Kerouac, Burroughs, and Carr as potential suspects, paving the way for an investigation that would have a major impact on the lives of the three emerging artists. Jennifer Jason Leigh, Kyra Sedgwick, David Cross, and Michael C. Hall co-star. ~ Jason Buchanan, Rovi

David Rasche
as Dean
View All

News & Interviews for Kill Your Darlings

Critic Reviews for Kill Your Darlings

Audience Reviews for Kill Your Darlings