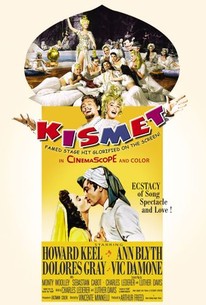 This fourth film version of the warhorse Edward Knoblock theatrical piece Kismet was based on the Broadway musical version of the same property. Howard Keel stars as Hadji, the poet of old Baghdad, who goes from beggar to millionaire in a single day. Hadji's daughter Marsinah (Ann Blyth) falls in love with the young Caliph (Vic Damone), while Lalume (Dolores Gray), the sexy wife of the despotic Wazir (Sebastian Cabot), sets her sights on Hadji. Meanwhile, the Wazir plots and plans to topple the Caliph from the throne and to add Marsinah to his own harem. Making periodic appearances is Omar Khayyam, played as a doddering old meddler by Monty Woolley. The Robert Wright-George Forrest musical score, based on themes by Borodin, includes such standards as "Baubles, Bangles and Beads", "This is My Beloved", "Stranger in Paradise" and "Not Since Ninevah". Though the dancing girls in the film are more modestly dressed than their stage counterparts, they are put through some fairly sensuous paces by choreographer Jack Cole. Kismet was good for another go-round in 1967, when it was adapted for television with Jose Ferrer, Barbara Eden, Anna Maria Alberghetti, George Chakiris and Hans Conried in the cast.

Howard Keel
as The Poet

Vic Damone
as The Caliph

Reiko Sato
as Princess of Abubu

Patricia Dunn
as Princesses of A Ba Bu

There are no featured audience reviews for Kismet at this time.