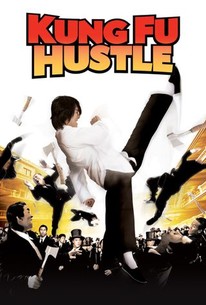 The work of international superstar Stephen Chow, Kung Fu Hustle is a humorous, special-effects-filled, action-packed martial arts epic set in early '40s China. A bumbling thief named Sing (Stephen Chow) desires to be the toughest member of the dreaded gangster hit squad known as The Axe Gang, but to completely join the gang he has to commit murder. When Sing attempts to rob a crowded run-down apartment complex known as Pig Sty Alley, the locals begin to defend themselves with some high-flying kung fu skills, and a tiny war erupts between the local masters and the axe-wielding gang. After the gang busts the ancient kung fu king known as The Beast (Leung Siu Lung) out of jail, tensions reach a boiling point as Pig Sty Alley's landlady (Yuen Qiu) leads an all-out attack against the gang and Sing discovers his true heroic fate. Kung Fu Hustle, which set box-office records across Asia during its December 2004 release, also stars Yuen Wah and Xing Yu, and features fight choreography by legendary masters of martial arts cinema Yuen Woo Ping and Sammo Hung. ~ Jason Gibner, Rovi

Leung Siu Lung
as The Beast

Fung Hark On
as Harpist #2

Qiu Yuen
as Landlady
View All

There are no critic reviews yet for Kung Fu Hustle. Keep checking Rotten Tomatoes for updates!