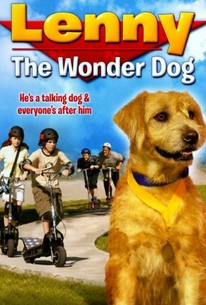 A chip designed to instantly train any dog falls into the hands of an evil scientist looking to enslave the children of the world and achieve ultimate power in directors Oren Goldman and Yariv Ozdoba's family-oriented comedy-adventure. Newyville misfit Zach Dylan hasn't had a very good day. In addition to being tormented by his ruthless classmates, his attempts to break the ice with brainy and beautiful classmate Becky Green are met with the kind of cool indifference that can only indicate rejection. Crossing through the park on his way home from school, lonely Zach finds a wandering pup that looks like he could use some human companionship. After smuggling the amiable pooch upstairs to his bedroom as to not irritate his mother's allergies, Zach makes a shocking discovery about his new four-legged friend -- this dog can talk! After explaining that he was the subject of a bold experiment by local scientist Dr. Island designed to train dogs by implanting them with a microchip, Lenny and Zach are soon interrupted by the unexpected arrival of Becky Green. When a group of nefarious scientist Dr. Wagner's henchmen burst into Zach's home, sending the young boy, Lenny, and Becky fleeing for safety, their ensuing investigation leads the trio to discover that the former colleague of Dr. Island has been kidnapping the children of Newyville in a bid to take over the world. Now, with little time left before the children of Newyville are all implanted with the secret microchip, Zach, Lenny, and Becky must work together to get the word out and stop Dr. Wagner before his dastardly plan is set into motion.

There are no critic reviews yet for Lenny the Wonder Dog. Keep checking Rotten Tomatoes for updates!