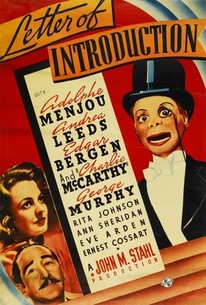 A master blend of high comedy and tense emotional drama, A Letter of Introduction reteams Adolphe Menjou, Andrea Leeds, and Edgar Bergen & Charlie McCarthy, who'd previously costarred in the negligible Goldwyn Follies. Menjou plays John Mannering, a Barrymoresque actor who years earlier had divorced his wife and severed his relationship with his daughter Kay (Andrea Leeds). Now a grown woman, Kay aspires to an acting career, fully determined to make it on her own without her father's help. She goes so far as to change her last name to Martin, and to keep her actual relationship to Mannering a secret from the public. This set-up leads to a dizzying series of complications, including the breakup of Mannering's romance with a tootsie named Lydia Hoyt (Anne Sheridan), who falsely assumes that Kay is Mannering's mistress, and Kay's own romantic travails with vaudeville hoofer Barry Paige (George Murphy). Meanwhile, Kay's ventriloquist friend Bergen and his dummy McCarthy rise to superstardom on radio. It is, in fact, Bergen and Charlie who are instrumental in reuniting the estranged Mannering and Kay, paving the way for the film's tear-stained conclusion. Unavailable for many years, A Letter of Introduction re-emerged on the Public Domain circuit in 1975.

Edgar Bergen
as Himself

May Boley
as Mrs. Meggs

Armand Kaliz
as Jules the Barber

William B. Davidson
as Mr. Raleigh

George Humbert
as Musician on Stage

Philip Trent
as Man at Party

Inez Courtney
as Woman at Party

Dorothy Granger
as Woman at Party

Dummy: Charlie McCarthy
as Himself
View All

Critic Reviews for Letter of Introduction

Audience Reviews for Letter of Introduction