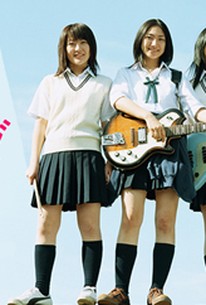 Four schoolgirls put the axiom "the show must go on" to the test in this rock & roll teen comedy drama from Japan. Nozumi (Shiori Sekine) and Kyoto (Aki Maeda) are two friends who attend the same high school and have decided to put together a rock band to play the school's talent show. Things are going well until two days before the show, when the group's lead guitarist quits for fear of breaking her fingernails and the singer walks due to lack of interest. Determined to make a showing one way or another, Nozumi takes over as bass player, Kyoto becomes the group's drummer, and their pal Kei (Yu Kashii) is drafted as lead guitarist, even though keyboards are her first instrument. Needing a singer, the girls literally take on the first likely candidate who crosses their path. However, the new vocalist turns out to be Song (Doona Bae), a Korean exchange student who not only hasn't sang before, but has only the most rudimentary command of Japanese. The girls give themselves the goal of being able to play "Linda Linda Linda," a hit for the Japanese pop-punk band the Blue Hearts, in time for the show, but is there any way Kei and Song can overcome their steep learning curve? Linda Linda Linda received its North American premiere at the 2005 Toronto Film Festival. ~ Mark Deming, Rovi