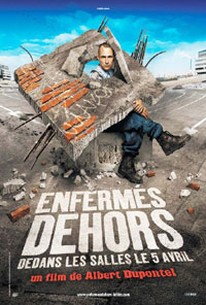 Albert Dupontel directs, writes, and stars in freewheeling French comedy concerning a glue-huffing homeless man who earns an unexpected modicum of respect after coming into possession of a police uniform. Roland (Dupontel) was wandering the shores of the Seine when he noticed a man hurling himself into the churning waters below. Upon investigating the site from which the man leapt, the curious derelict finds that the jumper, presumably a policeman, had left behind his uniform and a suicide note. When Roland attempts to do the right thing and return the uniform to the police station, he is chased away by overzealous cops before he has the chance to explain what happened. Upon noticing a cafeteria that provides free meals to policemen, Roland decides to make the best of his situation by donning the uniform and ordering dinner. Later, when Roland meets a singing mother (Claude Perron) who is struggling to get her children back from the malevolent in-laws who object of her lifestyle and see her as unfit to parent, the uniformed drifter attempts to use his newfound badge for a good cause. ~ Jason Buchanan, Rovi

There are no critic reviews yet for Locked Out (Enfermes Dehors). Keep checking Rotten Tomatoes for updates!

There are no featured audience reviews for Locked Out (Enfermes Dehors) at this time.