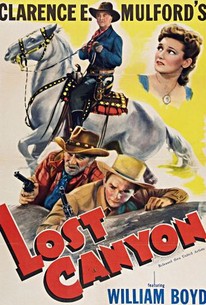 A virtual remake of Rustlers' Valley (1937), this average "Hopalong Cassidy" Western features Jay Kirby as Johnny Travers, a Hoppy associate framed for a bank robbery and supposedly killed during the ensuing chase. Johnny, however, to Hoppy and California Carlson's (Andy Clyde) great relief, proves to be very much alive but the accusation of robbery still stands. Hoppy, meanwhile, smells a rat when the local lawyer, Jeff Burton (Douglas Fowley), suddenly becomes very protective of his fiancÃ (C)e, Laura Clark (Lola Lane), whose ranch he desires. But why, when the price of beef is down, are Burton and the local banker, Zack Rogers (Guy Usher), so determined to buy up all the neighborhood ranches? In between the mayhem, The Sportsmen Quartette twice performs Joseph J. Lilley and Frank Loesser's melodious "Jingle, Jangle, Jingle". Contrary to popular belief, Lost Canyon was released by Paramount and was not part of the "Hopalong Cassidy" package sold outright to United Artists. ~ Hans J. Wollstein, Rovi

George Morrell
as Man at Dance

There are no featured audience reviews for Lost Canyon at this time.