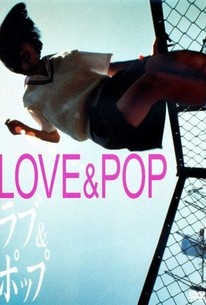 Following up on his wildly successful 1997 feature-length anime Neo Genesis Evangelion, Hideaki Anno takes digital camcorder in hand and makes his live-action directorial debut with this day-in-the-life drama about a quartet of enjo kosai (school girls) who make big bucks selling their services to middle-aged perverts with money to burn. Though frequently weird and exotic, their dates rarely request anything close to plain old vanilla sex. One geezer takes the four to sing karaoke. After belting out a few, he reaches into his bag and pulls out a bag of grapes. He asks that each lass bite into the fruit just enough to break the skin. Once that's done, he puts each grape in its own individual baggie and labels it. Other patrons are just as pitiful if less bizarre. The film focuses particularly on Hiromi (Asumi Miwa), who is trying to make enough money to buy a topaz ring and hide her right hand, which she thinks is ugly. Hiromi comes from a normal -- if blithely obtuse -- family and is not your typical portrait of an enjo kosai. Yet she hustles with her more street-smart friends and learns about her newfound profession's dangers and degradations the hard way. This film was based on a book by Ryu Murakami.

There are no critic reviews yet for Love & Pop. Keep checking Rotten Tomatoes for updates!

There are no featured audience reviews for Love & Pop at this time.