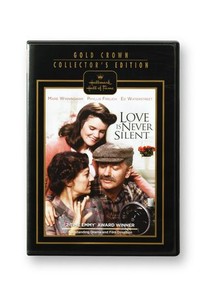 In its own mild, unobtrusive manner, the made-for-TV Love is Never Silent managed to knock an all-star adaptation of Alice in Wonderland out of the ratings box when it was first telecast on December 9, 1985. Based on the Joanne Greenberg novel In This Sign, the film stars Mare Winningham as a normally functioning woman with deaf parents. Using sign language, Winningham has spent most of her Depression-era childhood as her parents' only conduit to the outside world. When a close family friend (Sid Caesar in a towering non-comic performance) asks Winningham if she isn't sacrificing the opportunity for happiness on her own, she carefully considers his words. She marries Frederick Lehne, at which point her embittered parents close off their relationship with their daughter. How Ms. Winningham manages to bridge this gap is the focus of the film's final scenes. The parents are played by Ed Waterstreet and Phyllis Frelich, longtime members of the National Theatre for the Deaf. The Emmy-winning Love is Never Silent was originally presented as a Hallmark Hall of Fame special.

There are no critic reviews yet for Love Is Never Silent. Keep checking Rotten Tomatoes for updates!

There are no featured audience reviews for Love Is Never Silent at this time.