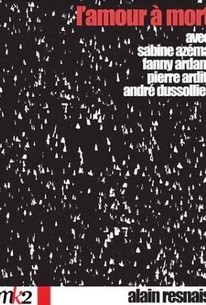 Acclaimed French director Alain Resnais, winner of many international film awards for his ground-breaking creativity (Hiroshima, Mon Amour, L'Année Dernière à Marienbad), follows up his successful La Vie Est Un Roman with this continuing saga of love and death. This time, two principal actors from La Vie.. (Pierre Arditi and Sabina Azéma) star as Simon and Elizabeth, a new couple very much in love, and two more (Fanny Ardant and André Dussolier) star as their friends Judith and Jerome Martignac. After Simon has arrived at an archaeological dig he is directing in the south of France, he meets the winsome Elizabeth, and the two fall deeply in love, living joyously together for a full two months. Then Simon has a seizure of sorts and appears to have died, but he miraculously revives with memories of his experience that make his feelings for Elizabeth pale by comparison. As he searches for a way to express and regain that experience, he has another seizure, and this time he does not come back. Elizabeth continues their previous conversations with friends Judith and Jerome, both Protestant ministers, in an effort to come to a decision about her own life and death. In this highly symbolic drama, Simon is clothed only in black, Elizabeth only in red, and several dozen especially composed musical interludes alternate with the action, their sounds accompanied by a snow-like pattern that moves down a black screen. Although critics do not rank this effort by Resnais with some of his earlier, best films, Amour à Mort is still a strong cinematic statement. ~ Eleanor Mannikka, Rovi

There are no featured audience reviews for L'amour à mort (Love Unto Death) at this time.