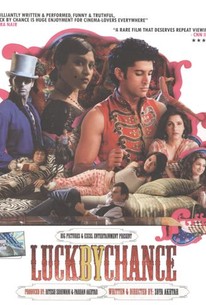 A Bollywood starlet and a struggling newcomer are brought together by kismet, working their way through the Hindi film industry as romance blossoms and their lives are forever changed. Arriving in Bombay with stars in her eyes and dreams of success, Sona has the luxury of a rented apartment, and passes the time in the company of her loyal friends. Everyone has a dream in this city, and as Sona works hard to make a name for herself on the big screen, Vikram leaves his parents' Delhi home and sets his sights on the city. Vikram's no fool; he has a way of getting what he wants, and when he meets Sona, the sparks start to fly. Meanwhile, superstitious producer Romy Rolly is developing a potential blockbuster designed to launch the career of 18-year-old Nikki, the daughter of '70s-era superstar Neena. Headlining the film is Rolly's biggest star, box-office heavy Zaffar Khan. When things start going south on Rolly's film, Vikram is called in for an audition. One audition is all Vikram needs in order to make a big impression, and before long things are looking decidedly brighter for all involved. ~ Jason Buchanan, Rovi

Critic Reviews for Luck by Chance

Audience Reviews for Luck by Chance

There are no featured audience reviews for Luck by Chance at this time.