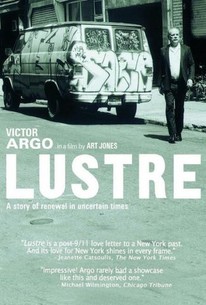 Character actor Victor Argo made one of his last screen appearances -- and landed one of his few leading roles -- in this independent drama. Hugo (Argo) is a loan shark who spends his days pounding the pavement in New York City, shaking down cheapskates who owe him money. Hugo believes in his job, and subscribes to the philosophy that everyone has to pay in one way or another to get through this life. But Hugo's great passion is New York City, and as he makes his rounds, he philosophizes about the city he loves and what has happened to it in the name of gentrification; he's also a fan of what he calls "real New Yorkers," and loves their open-hearted toughness as much as he loathes the weak-willed yuppies who now dominate the city. As he wanders the city sharing his views with anyone who will listen, Hugo is occasionally visited by the ghost of Archie (Jordan Lage), his onetime running buddy who is no longer among the living. Lustre was screened in competition at the 2004 Avignon Film Festival.

There are no featured audience reviews for Lustre at this time.