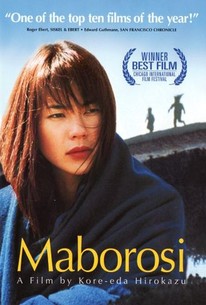 An understated examination of grief, Maboroshi is a deeply moving drama thanks to Koreeda's patient direction and achingly naturalistic performances by its impressive ensemble.

In Japan, the Maborosi refers to a mysterious beautiful light that lures sailors to their deaths far out at sea. This poetic, exquisitely photographed drama tells the story of Yumiko, a young woman trying to make sense of her first husband's mysterious death. She is no stranger to mysterious loss. When she was 12, Yumiko was in charge of taking care of her senile grandmother. The old woman wandered away one day and was never seen again, leaving the girl haunted by deep feelings of remorse and guilt. As a young woman she marries Ikuo and bears him a son. The couple are very happy and spend all their free time together. The happiness is shattered when one night a policeman appears to tell her that Ikuo had deliberately walked in front of an oncoming train and was killed. Years later, after she remarries, Yumiko begins investigating her first husband's death and learns disturbing things from the bartender he had seen just before death. This leaves her wondering what happened and why.

Sayaka Yoshino
as Yumiko as a Young Girl

Muku Muku
as Dog
View All