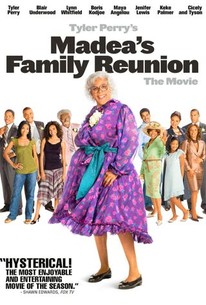 Tyler Perry's Madea's Family Reunion is sincere in its positive intentions, but leaves something to be desired as a film.

Actor and playwright Tyler Perry returns as Madea, a brash but loving African-American grandmother with her own way of doing things in this screen adaptation of his popular stage comedy drama. Madea has her work cut out for her when she finds herself dealing with a handful of family crises the same weekend that she's planned a massive family reunion. Her niece Lisa (Rochelle Aytes) is engaged to marry a handsome and successful man (Blair Underwood), but the good news is blunted when she reveals to her friends that he beats her. Another niece, Vanessa (Lisa Anderson), has been having romantic problems of her own, and isn't sure she should take another chance on love with a humble but good-hearted bus driver (Boris Kodjoe). Madea's older sister dies, with the funeral landing the same weekend as Lisa's wedding. And on top of all this, a court order forces Madea to look after Nikki (Keke Palmer), a troubled and angry teenager from a broken home. Madea's Family Reunion also stars Lynn Whitfield, Jennifer Lewis, Cicely Tyson, and Maya Angelou. ~ Mark Deming, Rovi

Maya Angelou
as May

Richard Reed
as Bailiff No. 1

Jennifer Sears
as Female at Reunion

Emmbre Perry
as Man on the Bus