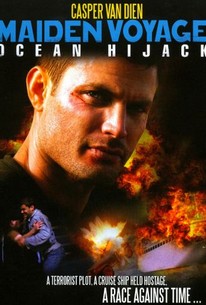 A former firefighter and Special Forces officer takes on a team of murderous terrorists when the oceanliner he's working on is hijacked shortly after leaving port. Hired to evaluate security on a luxury cruise ship, blaze battler and former military man Kyle Considine (Casper Van Dien) brings his young son Zach along for a week of fun at sea. The fun stops, however, when the ship sets sail and a highly organized team of terrorists threaten the lives of everyone onboard. Should the ransom fail to be paid, the hijackers will set off a series of bombs, killing all 300 passengers. Fortunately for the frightened passengers, Kyle and the ship's security officer Lynne have hatched an ingenious plan to capture the terrorists. When Kyle is thrown overboard by the bad guys, Zach and Lynne launch a heroic rescue mission. Just when it seems that the situation can't get any worse, the terrorists strike and the stakes are raised. With time running out and the terrorists gaining the upper hand, Kyle races against the clock to diffuse the bombs and save the day.

There are no critic reviews yet for Maiden Voyage: Ocean Hijack. Keep checking Rotten Tomatoes for updates!

There are no featured audience reviews for Maiden Voyage: Ocean Hijack at this time.