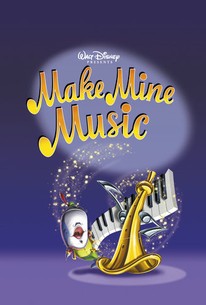 This collection of musical-themed shorts doesn't reach the artistic heights of Fantasia, but it's well animated and mostly good fun.

In his first postwar animated feature, Walt Disney attempted to repeat the Fantasia formula, substituting "pop" music for the Classics. Make Mine Music consists of ten unrelated cartoon vignettes, each one featuring a popular recording artist. "A Rustic Ballad" is the story of the Martin-Coy hillbilly feud, narrated musically by the King's Men. "A Tone Poem" is an impressionistic interpretation of the song "Blue Bayou", sung by the Ken Darby chorus and rendered artistically by Disney's ace animators. "A Jazz Interlude", done in "sketchbook" style, is performed by Benny Goodman and His Orchestra, and features the jitterbug specialty "All the Cats Join In". Jerry Colonna is next on the program in "A Musical Recitation", offering his own inimitable version of "Casey at the Bat". "Ballad Ballet" features Ballet Russe stars Tatiana Riabouchinska and David Lichine, dancing to Dinah Shore's vocalization of "Two Silhouettes". "A Fairy Tale with Music" turns out to be Prokofiev's "Peter and the Wolf", narrated by Sterling Holloway. Next, Benny Goodman and company return with a surreal visualization of "After You've Gone", followed by "A Love Story", which features the Andrews Sisters' rendition of the ballad "Johnny Fedora and Alice Blue Bonnet." The hilarious "Opera Pathetique" finale finds Nelson Eddy narrating the story of Willy, "The Whale Who Wanted to Sing at the Met". Better in its individual components than its sum total, Make Mine Music was drubbed by critics, who felt that Disney had abandoned his "artistic" aspirations in favor of crass commercialism, but performed reasonably well at the box office, inspiring several more "omnibus" animated features. In later years, the ten individual segments would be released as separate short subjects, both theatrically and as episodes of Disney's various TV series (where the original narration was often supplanted by the unfunny interpolations of Professor Ludwig Von Drake).

Sterling Holloway
as Narrator ("Peter and the Wolf")

Andy Russell
as Vocalist ("A Ballad in Blue")

Jerry Colonna
as Narrator ("Casey at the Bat")

The King's Men
View All

Critic Reviews for Make Mine Music

Audience Reviews for Make Mine Music