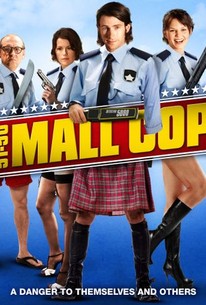 A contented mall cop sustains a debilitating injury in his effort to capture a fleeing thief, but begins entertaining the idea of robbing the mall after growing frustrated in his search for a new job. Frank's job at the Town Center Mall was an easy one until the day a thief broke into one of the department stores. In his efforts to apprehend the intruder as he smashes through a plate glass window, Frank loses his arm at the elbow. Six months later, Frank has lost his job as a result of his injury. As the job rejection letters start to pile up, a nostalgic Frank pays a visit to the mall, and meets his two replacements - an ex-punk rocker named Donna and a lazy public access television personality named White Wedding. In time Frank and Donna forge something of a romantic bond that is strengthened by Frank's willingness to open up about his injury and resulting job search. But later, as a plucky record store employee sets her romantic sights on Donna, the increasingly embittered Frank grows desperate for cash, and starts to wonder if he, too, might be able to rob the mall and get away with it.

There are no critic reviews yet for Mall Cop. Keep checking Rotten Tomatoes for updates!