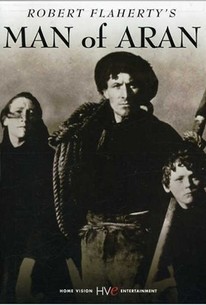 Nonfiction filmmaking pioneer Robert Flaherty's first sound feature elaborates on themes presented in his two previous major works, Nanook of the North and Moana. In all four of his major features, including Louisiana Story, Flaherty explored the relationship of man to his natural environment. This film was shot between 1931 and 1933 on the Aran Islands, west of Ireland's Galway Bay. Flaherty's screen "family" was actually composed of three unrelated islanders chosen for their photogenic appeal: Colman "Tiger" King is the title character, a no-nonsense fisherman, Maggie Dirrane plays his wife, and Michael Dillane his young son. Flaherty is more interested in recording the natural beauty of the islands, which are largely rock, and the surrounding sea than in presenting any formal information on the lives of the islanders. Life here is as elemental as it was for the Eskimos in Nanook and the South Seas islanders in Moana. Though the film came under fire from some critics at the time of its release for not presenting the social conditions that hampered the lives of the islanders -- many of them renting from absentee landlords indifferent to their economic well-being -- it has come to be accepted as work of film poetry rather than a social document. ~ Tom Wiener, Rovi

Critic Reviews for Man of Aran

Audience Reviews for Man of Aran

There are no featured audience reviews for Man of Aran at this time.