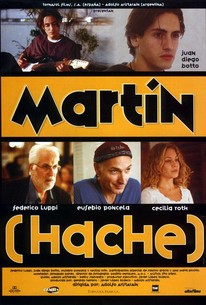 Upon learning that his estranged son in Buenos Aires may have attempted suicide by mixing dog tranquilizers with booze, expatriate Argentine film director Martin immediately leaves Madrid. Upon his arrival in Argentina, he learns that his ex-wife has given up on the aimless, depressive 19-year-old and wants him to contend with the youth back in Spain. Martin agrees, and his son, who is also named Martin, returns with him. Martin, Sr. lives with his cocaine-addicted, much-younger girlfriend Alicia and their mutual friend Dante, a homosexual actor. Though at some level, he cares for both, he is just too emotionally removed to ever show it. It is the same with his son, whom he calls H (pronounced "hache"), meaning hijo or son. Still, each member in the strange family attempts to reach the zombie-like boy, whose only interests seem to be the pursuit of sex and drugs. Essentially an internal drama centered around numerous intense and challenging conversations, this entry from Argentine filmmaker Adolfo Aristarain will most likely appeal to those who love intellectual cinema.

There are no critic reviews yet for Martín (Hache). Keep checking Rotten Tomatoes for updates!