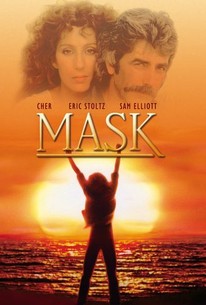 This is the true story of Rocky Dennis (Eric Stoltz), a personable young man suffering from "lionitis," a fatal disease which causes hideous facial disfigurement. The son of freewheeling biker Rusty Dennis (Cher), Rocky is accepted without question by his mom's boyfriends and cycle buddies, but treated with pity, condescension, and disgust by much of the outside world. The local high school principal tries to get Rocky classified as brain-damaged so he won't have to enroll the boy in his school, but Rusty fights for her son's rights with the ferocity of a mother lioness. Rocky makes friends easily both at school and at summer camp. He also falls in love with Diana (Laura Dern), a blind girl who cannot see his deformed countenance and is entranced by the boy's kindness and compassion. Now that he's got his own life in order, Rocky sets about to wean his chronically depressed mother from her drug habit. Mask is the sort of story that might have ending up wallowing in its own pathos had the acting, direction and scriptwriting (by Anna Hamilton Phelan) been anything less than very good. The film proved a much-needed financial success for director Peter Bogdanovich, though unfortunately it didn't come soon enough to stave off his declaring personal bankruptcy. ~ Hal Erickson, Rovi

Dr. Norman Kaplan
as Himself

Jack Wright
as Biker
View All