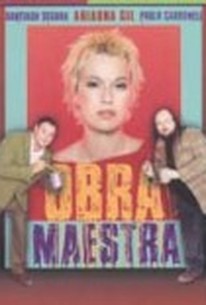 Two struggling filmmakers land a big star for their next production the hard way in this dark comedy. Benito (Santiago Segura) wants to direct movies, and his friend Carolo (Pablo Carbonell) is a would-be actor who dreams of starring in Benito's productions, but their careers in show business are going nowhere fast. Benito has an idea for a new film, A World For Us, and is convinced Carolo would be perfect for the male lead -- and that screen siren Amanda Castro (Ariadna Gil) is just the actress to play his love interest. But Benito can't afford Amanda's salary for participating in his Super-8 project, so he and Carolo sneak into her dressing room in hopes of shooting some footage of her on the sly that they can use. But things don't go as they hoped, and Benito and Carolo end up kidnapping Amanda, who becomes the unwilling star of their newly expanding film, with the actress "playing" many of her scenes while handcuffed to a wheelchair. The plot line for Obra Maestra bears a certain similarity to the John Waters film Cecil B. Demented, which was released earlier the same year -- so much so that Waters considered legal action against the producers. ~ Mark Deming, Rovi

There are no critic reviews yet for Masterpiece. Keep checking Rotten Tomatoes for updates!

There are no featured audience reviews for Masterpiece at this time.