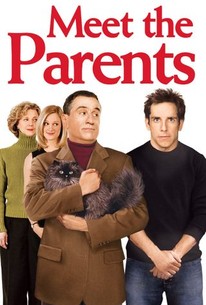 Despite sometimes sitcom-like execution, Meet the Parents is a hilarious look at familial relationships that works mostly because the chemistry between its two leads is so effective.

In this comedy from Austin Powers director Jay Roach, Ben Stiller plays a young man who endures a disastrous weekend at the home of his girlfriend's parents. Greg Focker (Stiller) is completely in love with Pam Byrnes (Teri Polo), and views their upcoming trip to her parents' house on Long Island (where her sister is to be married during the weekend) as a perfect opportunity to ask her to marry him. Once Greg is introduced to Pam's parents, however, things stampede steadily downhill. Pam's father, Jack (Robert De Niro), takes an instant and obvious dislike to his daughter's boyfriend, lambasting him for his job as a nurse and generally making Greg painfully aware of the differences between him and Pam's family. Where Greg is grubby, relatively unambitious, and Jewish, Pam comes from a long line of well-mannered, blue-blooded WASPs. Things go from bad to worse in less time than it takes to spin a dreidel, with Greg incurring the wrath of both Pam's father -- who, it turns out, worked for the CIA for 34 years -- and the rest of her family, and almost single-handedly destroying their house and the wedding in the process. ~ Rebecca Flint Marx, Rovi

Bernie Sheredy
as Norm the Interrogator

News & Interviews for Meet the Parents

Critic Reviews for Meet the Parents

Audience Reviews for Meet the Parents