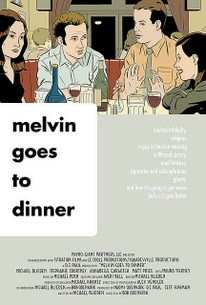 Mr. Show alumnus Bob Odenkirk's directorial debut, Melvin Goes to Dinner, is based on the play +Phyrogiants! by Michael Blieden, who also adapted the script for the screen and stars in the film's titular role. Melvin has just broken up with his girlfriend, Trenice (Melora Walters), and has met up with his friend Joey (Matt Price) and two women, Alex (Stephanie Courtney) and Sarah (Annabelle Gurwitch), whose relationship to the men remains ambiguous. From there, the bulk of the action takes place around a table at a restaurant, as the four bare their innermost secrets and discuss everything from ghosts to stewardesses to masturbation. The film was shot simultaneously on five hand-held cameras in order to capture the essence and idiosyncrasies of the constantly overlapping conversations. Featuring appearances by Odenkirk, David Cross, Maura Tierney, and Jack Black in an unbilled cameo as a mental patient, and a score by Michael Penn, Melvin Goes to Dinner was the winner of the Audience Award for First Film at the 2003 South by Southwest Film Festival, the Best American Feature Award at the 2003 Avignon Film Festival, and the Best Picture Award at the Phoenix Film Festival.

There are no featured audience reviews for Melvin Goes to Dinner at this time.