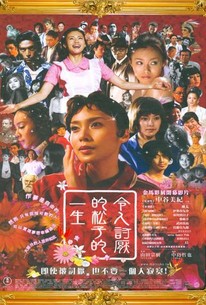 An aimless twenty-year old drowning himself in booze after a recent break-up begins to come around while piecing together the life of the aunt he never knew he had in director Tetsuya Nakashima's adaptation of Muneki Yamada's original novel. Unable to deal with his latest break-up, Sho Kawajiri (Eita) has locked himself away in his Tokyo apartment to dull the pain in an emotion-numbing sea of alcohol and pornography. When his estranged father suddenly appears to present Sho with the ashes of the aunt that he had never known, the crestfallen son soon finds his sorrow replaced with a driving curiosity about his mysterious Aunt Matsuko (Miki Nakatani). Later, when Sho travels to his deceased aunt's ramshackle apartment, it begins to appear Matsuko is reaching out from the great beyond to take her nephew a guided tour of her tragic life. As a child, Matsuko's father lavished attention on the girl's chronically-ill sister as the healthier Matsuko sat love-starved on the sidelines. Though she would eventually grow to become a popular junior high school teacher in her hometown, Matsuko's career was cut unexpectedly short when she boldly took the blame for a theft that was actually committed by her prized pupil Ryu. In the years that followed, Matsuko's desperate search for love would lead her into a series of abusive relationships with me incapable of coping with her smothering affections. Later, after falling from grace as a sex worker and serving a stint in prison, Matsuko crosses paths with her favorite student Ryo and finally believes she has found true love. Unfortunately for Matsuko, Ryo has become a violent gangster, and the person she thought would finally bring the love she had always longed for soon abandons her. Now left alone in the world and bereft of the life-affirming love that once seemed so closely within reach, Matsuko wanders down a corrosive path of self-destruction that will eventually seal her own grim fate.

Critic Reviews for Memories Of Matsuko

Audience Reviews for Memories Of Matsuko