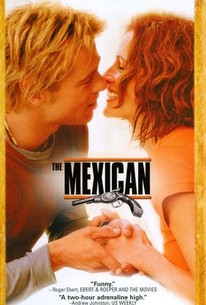 Though The Mexican makes a good attempt at originality, its ponderous length makes it wear out its welcome. Also, those looking forward to seeing Roberts and Pitt paired up may end up disappointed, as they are kept apart for most of the movie.

A clumsy criminal is put in a position where he not only has to save his own skin, but that of his girlfriend in this comedy with strong undercurrents of romance. Jerry Welbach (Brad Pitt) is a low-level Mafia "mechanic" whose ineptitude is countered by frequent (but unpredictable) bursts of dumb luck. Jerry's girlfriend Samantha (Julia Roberts) wants him to get out of the business, and after his latest blunder lands capo Arnold Margolese (Gene Hackman) in jail, so does mid-level crime kingpin Bernie Nayman (Bob Balaban). But Bernie insists that Jerry do one last errand for the mob before they let him find employment elsewhere -- he has to go to Mexico and recover a rare and very valuable pistol, which is said to be cursed. While Samantha objects to Jerry taking the assignment, he isn't in much of a position to argue; Jerry heads south of the border, while Samantha, in a huff, sets out for Las Vegas. Once in Mexico, Jerry finds the pistol easily enough, but making his way back to the States proves to be an unexpected challenge. Meanwhile, Jerry's superiors want insurance that he'll return with the goods, so they hire Leroy (James Gandolfini), a hitman, to kidnap Samantha and hold her hostage until Jerry comes back. However, Samantha and Leroy quickly strike up a friendship, and she soon learns the gunman has a sensitive side he doesn't show to the world -- along with a few other secrets. The Mexican marked the first screen pairing for mega-stars Julia Roberts and Brad Pitt -- though, given the film's narrative arc, they play only a handful of scenes together. The film was directed by Gore Verbinski, who won awards for his work in commercials before breaking through with the quirky family comedy Mouse Hunt.

Alfredo Escobar
as Car Thief No. 2

Luis Artagnan
as Car Thief No. 3

Critic Reviews for The Mexican

Audience Reviews for The Mexican